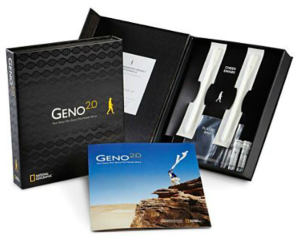 Last year, my brother got me a Geno 2.0 kit from National Geographic.  It took me a while to get around to it.  But, now that I have done it…  Coolest. Gift. Ever.  Particularly if you are a sucker for genetic anthropology, and a map freak to boot.  I mean, its one thing to spend tons of time hunting down different animated maps depicting mankind’s diaspora from Africa (like the National Geographic’s Global Human Journey; or Professor Stephen Oppenheimer’s “Journey of Mankind: The Peopling of the World” funded by the Bradshaw Foundation; or this not-so-animated Genetic Atlas of Human Admixture History; or this completely static World map of Y-chromosome haplogroups – really, why is this not animated!)  Its an entirely different thing to have your own mitochondrial DNA sequenced and plotted over time against these geographic haplogroup mappings.  See mine here.

Its fascinating.  I have long thought the concept of race was crap.  Growing up as a racist (oh, and sexist and homophobic) white southern male in the 1970s and 80s, it took me a while to get to that point in life.  But, getting the results of the Geno 2.0 kit made it very clear.  In my youth, my Scotch/Irish/British/WASP and pioneer-stock roots clearly imparted me special “caucasian” status, along the traditional racial lines of distinction that were culturally reinforced every day in “The South”.  Even as a fan of Charles Darwin and the Origin of Species, my youthful ignorance could not be eroded.  It wasn’t until the concepts of “genetic anthropology” and mitochondrial DNA were popularized that my small brain finally grasped that the variety of humanity (both genotypically and phenotypically) was more like different breeds of canines (though, even less material) than the tired concept of “race”.  And, that over the past 100,000 years, mankind had journeyed from its point of origin in eastern Africa to every corner of the Earth, adapting genetically and in physical appearance from time to time.  But, no.  These changes have manifested more as illusions obscuring the truth than anything truly meaningful.  Thanks, evolution.  Really helpful.

My maternal and paternal DNA map from the Geno 2.0 kit was eye opening.  As best as I can tell, Mom is kind of a Fertile Crescent girl, with a lot of her ancestor’s time spent in Western Asia, kind of at the intersection of Iran, Western Turkey, the Caucuses and the like, going back as far as 55,000 years.  Dad is more of an Egyptian. His ancestors stayed in Africa, mostly around current day Ethiopia, Sudan and Egypt until say 18,000 years ago, until his ancestors jumped the Mediterranean into the present day eastern Turkey and the Balkans.  (What is funny about this to me is that as a kid growing up in Central Florida, when the Mormons or Jehovah’s Witnesses would come by the house asking whether he had ever read the Bible, he would turn on his thick British colonial Trinadadian accent and say “I’m Muslim”, which would send them moving along pretty quickly.)

Interestingly, the major haplogroups that define their distant past (both mom and dad), going back 60,000 years are majorly different – even though in a modern context they would both be considered standard “white people”.  But, also, there are no specific haplogroups that define either my father’s “Britishness” or my mother’s “American frontiersman” heritage.  Discernible genetic differences end about 10,100 ± 1,610 years ago for Mom and 10,000 – 20,000 years ago for dad.  I have long understood that the Brits are basically “mutts”, with crazy mixes of waves of Paleolithic, Celting, Angle-Saxon and Norsmen/Norman genes intermingled in interesting ways.  But, still, I would have thought that somehow these would have been identified in distinct haplogroups.  Alas, no.  I guess this is the difference between genotypes and phenotypes?  Or, as I have long said, race actually isn’t a thing.  Groups of humans have long used all sorts of criteria to exclude others, and have reinforced their unique differences through costly measures that demand demonstrable commitment, and they have long used the term “race” as a shorthand for these differences.  We have long distinguished ourselves against the “other” using the term “race” as code for the cultural differences that we preternaturally reinforce (and otherwise guard against) with various social control mechanisms.  In particular, the cultural differences include language (including dialects, vocabularies, and even accents), clothing/dress, hygiene, scent/odor, religious/moral commitments, diet, dietary induced physical/physique development, cohabitation standards, familial expectations, obscure ritual interactions, and all of the social differences that we find “weird” and “foreign” in the “other”.

So, when I get that US Census form that asks me to check my race, I am definitely going to start checking “other”.  I know that these Census data help social scientists make broad group based assumptions about our behavior.  But since that in turn is too often used to devise social control mechanisms to influence the behavior of “African Americans”, “Latinos” and so forth (which has turned out oh so well, right?!?!), perhaps everyone opting out of this problematic measurand would force more sophisticated thinking about the commonalities that could lead to cultural solidarity, and the actual differences that must be analytically understood in order to form a more Perfect Union.