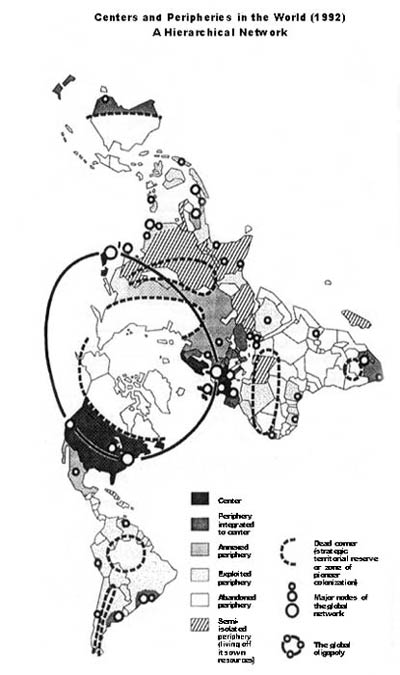 (Geo)graphic brought to you by a French Marxist, Francois Chesnais via a great, off-beat, and very strange article by Brian Holmes.

I was fishing around for the name of the map projection used in one of my new favorite books – “Strategic Atlas: A Comparative Geopolitics of the World’s Powers” by Gerard Chaliand and Jean-Pierre Rageau – and came up with this Wikipedia page.  Unsatisfied by the explanation provided by wikipedia (though their graphics rock), I continued with the GoogleMachine on the InterWeb (which is a series of tubes…) and found Holmes’ treatment, which I quote below.

“Published in France in 1994, this book was among the early attempts by the Marxist Left to grasp the industrial and financial transformations unfolding on a global scale. And it opens with a map, showing the hierarchy of inclusion and exclusion at work in an integrating world.

The projection we see here is, ironically, a variation on the Dymaxion map created in the 1950s by the radical utopian designer Buckminster Fuller. In his eyes, ordinary maps caused humanity to “appear inherently disassociated, remote, self-interestedly preoccupied with the political concept of it’s got to be you or me; there is not enough for both.” (8) The Dymaxion map was conceived to eliminate the north-south distortion of the common Mercator projection, as well as artificial divides between the continents. Conflating the ideas of “dynamic + maximum + tension,” the word “dymaxion” was understood as equivalent to Fuller’s ecological motto, “doing more with less.” In the 1960s he would develop the idea of a “World Peace Game” to be played by teams of citizens or diplomats shifting global resources across an immense version of this map, with the aim of developing humanity’s cooperative capacities through simulations on a world scale. (9) But in the map that Chesnais presents, the Fuller projection is used to show how the major nodes of the Triad – or the “world oligopoly” – are integrated into a single, densely connected space of competition and cooperation, where major industrial and financial groups of each region constantly seek to “do more with more,” that is, to infinitely accumulate more capital. At the same time, the earth appears divided into three regional systems, each differentiated hierarchically according to degrees of access to the major flows of money, trade and information that constitute the world oligopoly.”