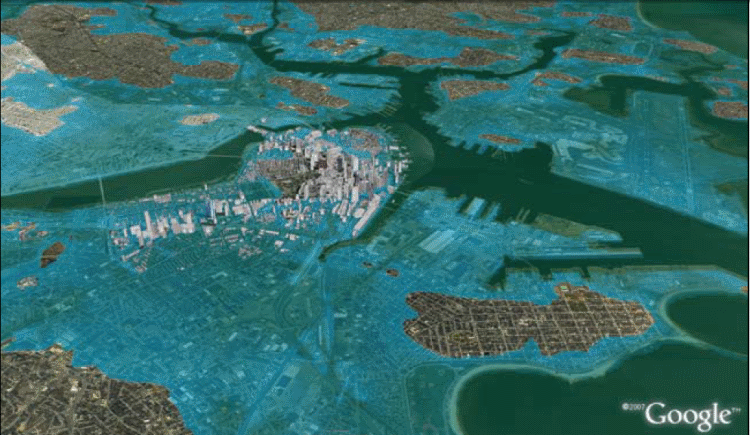 Geo(graphic) of Boston under a 5 meter sea level rise provided by Architecture 2030.I recently asked my friends at CIESIN for a 1 and 2 meter sea level rise run on a high resolution digital elevation model so I could peruse my Florida ocean front real estate options.  Given the economic conditions down there, I’m looking to buy.  Scientific consensus has us about 1.5 meters down by 2100.  If I’m going to spend my hard earned money on beach front property, I want ensure that my great grandchildren are not under water.  I’ll get the data from CIESIN once the holidays are complete and post some prime ocean front real estate spots for the 2100-2200 AD/CE time frame, but in the meantime, I found a nice little report with some nice pics that validate my Florida concerns.Unfortunately, the Florida pics aren’t as good as this Boston shot (above).  They didn’t include a 1.5 meter pic of Boston that was big enough for my blog.  I would have used that.  Instead, they went for the dramatic  5 meter model with the simple heading, “During the last interglacial period, 125,000 years ago, when the earth was this warm (2 °C to 3 °C warmer), sea level was four to six meters higher than today.”  Somehow, I don’t think (though I haven’t checked) that it is supposed to take 125,000 years to get back to this level. 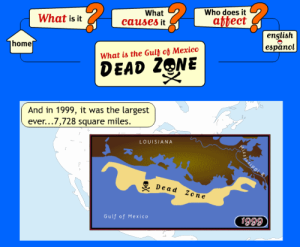 (Geo)graphic provided as part of a great site that you all should visit.

I recently read Michael Pollan‘s Omnivore’s Dilemma, which was an huge eye opener in many ways (I highly recommend it).  One of the minor asides he made in the book, about the adverse effects of the man-made fertilizers that underpin modern American industrial agriculture, related to an ever growing dead zone in the Gulf of Mexico.  I wanted to learn a bit more, so I went to Google (I thought about going to a library…just kidding).  Beyond “Gulf of Mexico”, “Gulf of Mexico Dead Zone” is the most frequent search item proposed by Google Suggest with 229,000 results.

Does this strike anyone else as somewhat disturbing?  Granted, Google’s search algorithms reflect the most popular searches (e.g., Gulf of Mexico Weather, the next most popular search has 2.1 million items) rather than the most relevant, but come on?!

This summer, the Washington Post reported that the kill zone was 8,000 square miles with too little oxygen to support “fish, shrimp, crabs, and other forms of marine life”…which would have been bigger (probably the biggest ever) if not for Hurricane Dolly.  This is basically the size of all the waterbodies in the State of Minnesota.  Could you imagine if all the lakes in Minnesota were dead?  That would make the news.  The 2005 Dead Zone was said to be the size of New Jersey!   “Hypoxia” is the term, and it is effecting the entire Mississippi watershed.

It seems that the past half century or so of industrialized agriculture has externalities that just don’t get covered on the nightly news.  I wonder if Archer Daniels Midland would pull their sponsorship if George Stephanopolous covered this issue on ABC’s This Week?  That would be a fun social experiment.  It was good to hear from Pollan that there are realistic, affordable, alternative modes of agriculture (I think the kidz would call it Old Skool agriculture) that would help mitigate some aspects of the health crisis in the US, while also mitigating the Dead Zone.  I saw in a footnote somewhere that Pollan was advising the Obama campaign on agriculture issues (read this article, if you want the gist).  I wonder if he will be giving us some change we can believe in?!

As a Floridian, I have a bit of a love affair with the Gulf and see this as (let me vastly understate my feelings) unfortunate.  I find it interesting that the (geo)graphic provided above is not generated by some Gulf States propagandists, but by the Science Museum of Minnesota.  They should be complimented on their self-awareness.