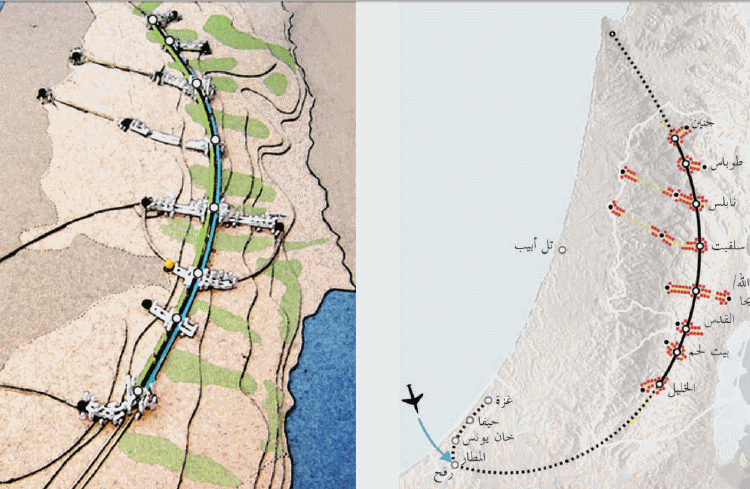 This (geo)graphic was developed by Doug Suisman in a 2005 RAND Report.

As the crisis in Gaza transforms into a ground operation that is likely to be much more costly than the air strikes, someone needs to be thinking of the end game.  I am unconvinced that anyone is.  All we do know is that violence breeds more violence, and that this operation will make a new generation of Palestinians (and indeed Muslims worldwide) prone to anti-Israel and anti-Western violence – unless something very bold and different is done.  So, why don’t we try something new.  President-elect Obama should evaluate a 100% commitment to the immediate implementation of Doug Suisman’s Arc – the boldest land use planning exercise I have ever seen.

It is a concrete idea flowing from a study by the RAND Corporation’s Center for Middle East Public Policy, entitled “The Arc: A Formal Structure for a Palestinian State”.  The study was financed by 87 year old American property developer, Guilford Glazier, who remembered the transformational power of the Tennessee Valley Authority during the Great Depression.  Glazier wanted an answer to the challenge of how to accommodate the return of hundreds of thousands of refugees created by the 1948 war.

Suisman met that challenge, and more.  The study was not done with any timeline in mind (as the original research was done primarily during the second intifada).  Indeed, times have changed since then, and I believe that Suisman’s Arc proposal is ready made for the New Year.  A proposed Palestinian national infrastructure corridor linking Gaza and the West Bank, Suisman’s Arc offers a vision of a thriving Palestinian state inclusive of urban centers connected by a rapid rail line, a national water carrier, energy generation and transmission, telecommunications lines, and a national park system of parks, forests, reserves, and farmlands.  Palestinian’s have expressed great interest.  Who wouldn’t?

A $40 billion price tag has been estimated, which I believe could quickly be raised from the US ($10B, Saudi Arabia $10B, India $5B, Israel $5B, EU $5B, China $5B – given the global recognition of the criticality of the Palestinian situation to a variety of global conflicts.  And, there’s even a video explaining the proposal on Suisman’s website (www.suisman.com)…which is much more than most policy proposals in Washington, DC can say for themselves.  The Milken Institute hosted a nice discussion on the topic.

I, like many, have been reading all of the reporting and commentary since the truce came to an end.  But, I find the entire dialogue completely unsatisfactory, as there is no affirmative vision for an end-game.  I don’t know that diplomats and security professionals can articulate a meaningful end-game without that which only a land use planner can bring.  “Design Meets Diplomacy” is the title of one Business Week article on the Arc proposal.  The title couldn’t be better.  Rather than having politicians and diplomats hammer out the sovereign state of Palestine, why don’t we focus on what it could look like after a peace accord is signed.