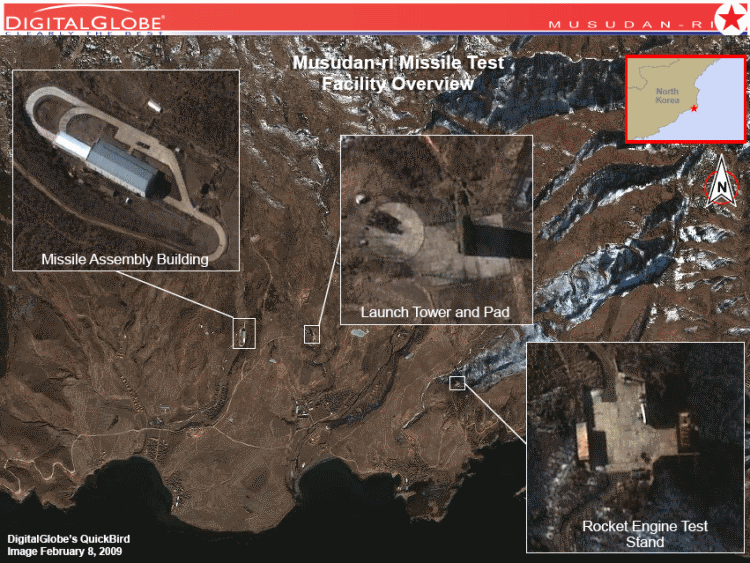 These (geo)graphics were provided by my friend Jeff Kerridge at Digital Globe.

So, according to Jeff’s reconnaissance package, “The Musudan-ri missile assembly building is (according to globalsecurity.org) capable of handling two Taepodong-2 class three stage launch vehicles, in addition to several vertical test cells in the high bay portion.”  Then, Wikipedia says:

Striking Anchorage in Alaska (one of the closest potential mainland US targets) could be difficult given that the distance from the launch site co-ordinates (see below) and Anchorage is 5,634 km[3]. However the range specified below details 4,500 km, meaning the missile would fall short by around 1,000km. It is only future variants (i.e. planned missile designs that are still on the drawing board), that could reach up to 9,000km therefore it is misleading to suggest that the Taepodong 2 that is due to be test-fired between April 4th and 8th 2009 has the ability to reach mainland US targets. Based on the size of the missile, the fuel composition, and the likely fuel capacity, it is estimated that a two stage variant would have a range of around 4,000 km (2,500 statute miles) and a three stage variant would be capable of reaching as far as 4,500 km (2,800 statute miles), giving it potentially the longest range in the North Korean missile arsenal.[1] The burn time of each stage is a little over 100 seconds, thus allowing the missile to burn for 5 or 6 minutes. Future highly speculative variants of the missile could be capable of a range of approximately 9,000 km (5,600 statute miles).[4] At maximum range, the Taepodong-2 is estimated to have a payload capacity of less than 500 kg.[2] Whether this would be large enough to carry a North Korean designednuclear warhead is currently unknown, as the full development status of the North Korean nuclear program is largely unknown. Early versions did not have the payload or range to launch a satellite into space.

No problem for Governor Palin, but I guess Japan has got to be unhappy.  I would love to be a fly on the wall at the next round of the Six-Party Talks.  Perhaps they are just pissed that we took Christopher Hill away from them! 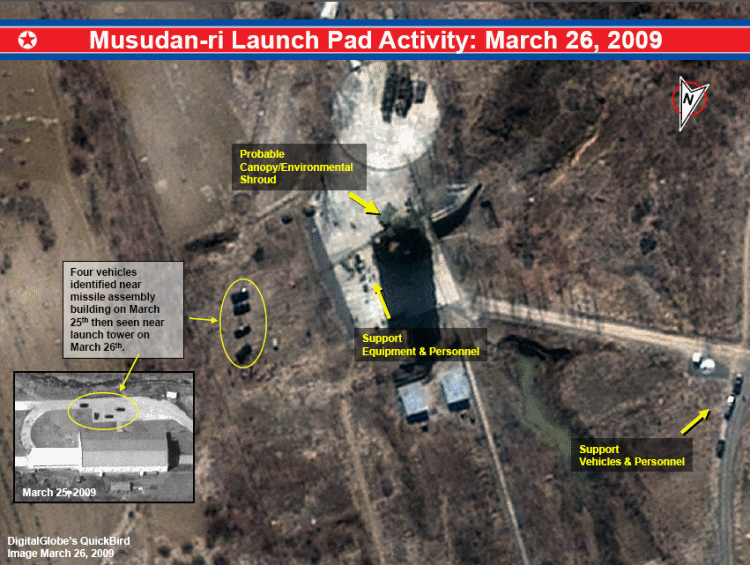 More from the reconnaissance package,

“An imagery review of the launch complex from previous DigitalGlobe imagery during late June, 2006 revealed similar activity at the launch pad and missile assembly building prior to the July 5, 2006 Paektusan/TaepoDong-2 missile launch.

According to Janes Defence Weekly, in 2006 the Paektusan-2 sat on the launch pad (within the launch tower) for approximately 20 days before being launched.”

I bet you can set your watch to this brief.