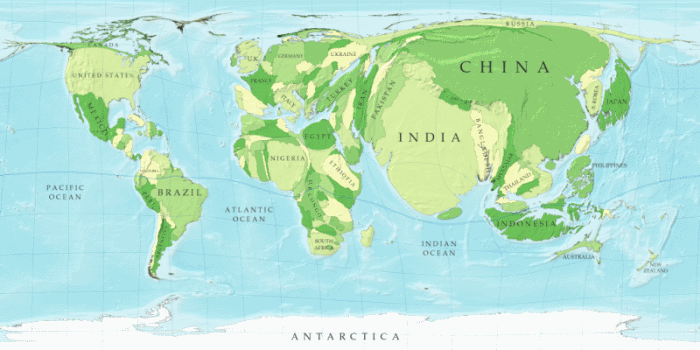 This (geo)graphic was found on The Encyclopedia of Earth, but sourced to the University of Michigan.

As energy prices went higher and higher over the past several years, and “peak oil” talk abounded, I found myself fond of saying “we don’t have an energy crisis, an environmental crisis, a water crisis, a food crisis, or whatever…we have a people crisis!”  I still remember last Summer driving through New Delhi at night seeing thousands of people sitting together in small groups on the street curbs in the dark, just hanging out with friends.  If every Indian burned as much electricity every evening as the average American (I have my big flatscreen, 2 computers, 2000 Christmas lights, houselights, and more running right now just for myself…oh dear!), I am pretty sure the Earth would instantaneously implode.  You get my drift.  I like this (geo)graphic because it inadvertently makes the earth look like it is going to burst from overpopulation.

Taken from the EoE site, “In this map the sizes of countries are proportional not to their actual landmass but instead to the number of people living there; a country with 20 million people, for instance, appears twice as large as a country with 10 million. (Source: University of Michigan)”

These days, I am continually driven to recollect a conference I helped with nearly 15 years ago as we were establishing the Earth Institute at Columbia University.  One of the speakers was Joel Cohen discussing his book “How Many People Can the Earth Support?“.  He outlined the choices and constraints that provide various answers to this question.  I forget the high numbers in his spectrum, but I believe that 12 billion was not out of the question.  But, I always saw his discussion of this topic as a bit too detached, and thought that it lacked an appreciation for the limited ability of renewable resources to renew themselves in the time horizons necessary to support the projected growth.  In short, the book seemed to miss much of the fragility in the system.  Personally, I adhere to a worldview that tracks more closely to Jared Diamond’s “Collapse“.  We simply need an Earth with fewer people, as fast as we can manage it, through decreased fertility.

Jeffrey Sachs, the current Director of the Earth Institute, in his book the “End of Poverty” offered a more appetizing discussion on these matters than did Cohen (to be fair, Cohen may have evolved his line of argument over the past decade).  In that book, he did a great job focusing on how to save human lives from malaria, tuberculosis, AIDS and the like, and to extricate a great mass of humanity in Highly Indebted Poor Countries (HIPCs) from its “poverty trap”.  After focusing on eliminating the mesmerizing suffering (which does nothing for curbing population growth), Sachs did finally get to what I found to be a bit of a punchline.  Women across the globe must be educated, employed, and in control of their lives.  Only then will the birth rate will drop.

While I am squarely in support of alleviating suffering and eliminating extreme poverty, I think that serious action must be undertaken soon to break the gordian knot of norms, institutions, and taboos that prevent the education, free association (including the selection of mates), and workplace contribution of women.  I am all for cultural diversity, and respecting the richness of human cultures across the globe.  But, particularly if the solution to our spiralling “people crisis” (and all of its global impacts) is a change in how various cultures treat their women, then I believe that we need to get serious about encouraging cultures worldwide to tranform how they think of womankind.

Let’s see if Secretary of State nominee, Senator Clinton can get us started on this challenge.